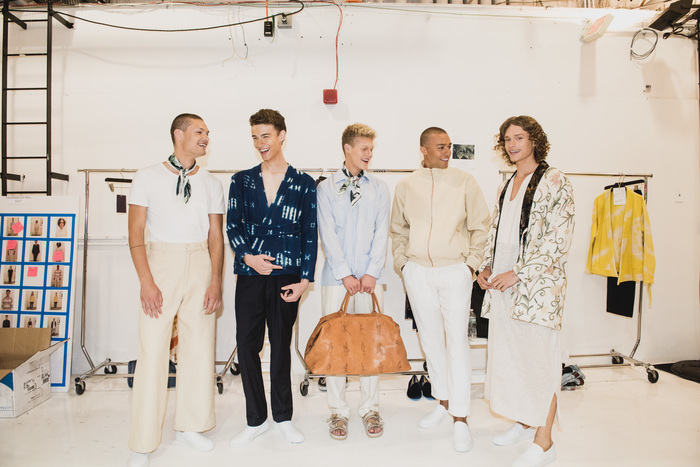 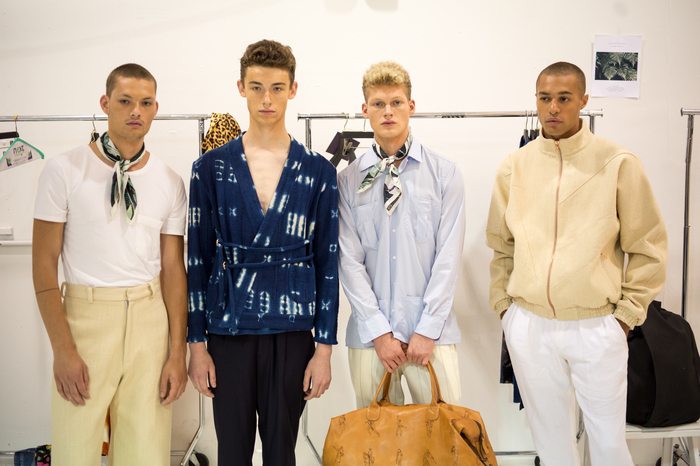 “Natty little silk scarves were knotted at the neck and worn over T-shirts that occasionally boasted tongue-in-cheek graphics like SIMP (a play on the word simpleton, inspired by an inside joke between the designers), or Vogue Gowanus.”

AM Club was included in the Palmiers Du Mal show yesterday at New York Men’s Fashion Week. Here is the press release and images below. Also check out this Vogue feature as well as WWD🙂 You can shop these designs here.

New York, NY, July 14, 2016 — New York City-based menswear label, Palmiers du Mal (pronounced: pä(l)mēā d/u/ môl ), is pleased to introduce the latest collection, now numbered 2017.01, a move away from traditional seasonal designation, which debuted with the brand’s second runway show at CFDA NYFW: Men’s on Thursday, July 14th at 2pm. As timeless as it is indulgent, the season-less offering continues to take inspiration from the Kinetic Creative,who, in the latest iteration, has matured to embrace his inner Zen-like ease and has grown to embody a vision of the gypset lifestyle in 1960’s Laurel Canyon, where the line between loungewear and casual elegance is barely discernable. Utilizing globally inspired shapes, largely influenced by Japanese traditional design, the current offering is ideal for the artistic nomad seeking a Utopian existence. Collection 2017.01 exerts a more obvious yearning for pleasure and superfluity for the traveling “Palmiers Playboy” who casually careens from one artistic enclave to the next, peacocking without sacrificing refinement, finesse, and intemperance.

Continually inspired by global influences and abiding by the ethos “Class, Grass, and Ass,” Palmiers du Mal’s 2017.01 collection places a heavy emphasis on directional design pieces intended to create a sense of individuality. These statement pieces feature an increased investment into fabric sourcing that includes the utilization of upholstery and global textiles not typically used in menswear. New shapes for the season include longer cardigans, unique “over-neath” styles (designed to fit over and beneath other garments, emphasizing the continuation of a play with layering), as well as Japanese-inspired outerwear, casually worn-in linen pants, and Bohemian Baja pullovers. Luxury cashmere silk trousers, when paired with progressive shirting and asymmetrical jackets, fulfill the vision that Creative Director Shane Fonner and Co-Founder Brandon Capps have spent years curating.

“I really wanted to improve substantially from the last collection,” says Fonner. “We invested much more heavily into our sourcing and product development, expanding our textile assortment to include African mud cloths, short-run upholsteries, English cashmeres and silks, Japanese denim, and even a limited- production Spanish floral silk in a deep navy, one of the more beautiful fabrics I’ve come across. This collection demanded an elegant, luxury touch, and I believe we’ve come closer to fulfilling our creative vision and identifying our consumer – a more fully realized version of the Palmiers du Mal playboy. He’s growing up and evolving into a more eccentric, whimsical, and philosophical version of himself.”

Playful interpretations of work wear, alongside carelessly lavish elements continue to express the ongoing ideology of the collection: a Bohemian offering that speaks to the man of many passions through the pairing of slouchy, silky playwear with opulently tailored options. The weighty canvases and African mud cloths add a substantial texture that offsets the dainty silks and colorful dyes. Double-belted noragis are worn as cardigans, embodying a vision of the bohemian lifestyle in Laurel Canyon during the 60’s. Stepping off a plane in Tokyo or Marrakech, one may easily mistake the Palmiers du Mal man for a wealthy scion of fashionable ilk, or a gypset icon. The opposite of restrained or subdued, the Palmiers playboy opts for statement articles, imbuing them with a sense of capricious whimsy as they are brought back to Earth when paired with more tonal basics.

As a result, the Palmiers man, though a bon vivant and notorious rake, assumes an image of roguish sophistication and refinement. “It takes a special, self-confident man to pull off a tailored double-breasted blazer with a kaftan, but it looks unconsciously exquisite and dangerously marvelous,” says Fonner.

The first collection of 2017 is the sophomore runway outing for Palmiers du Mal, showing during the CFDA NYFW: Men’s shows on July 14th, 2016 at Skylight Clarkson Square in New York City. “I’m extremely excited to show the new collection,” says Fonner. “For me, this represents a maturation and a

leap into something that fully embraces Luxury. I think the addition of a groovy mentality enables this Mammal of Paradise to encounter his sumptuous, jaunty wont.”

Leather travel bags & portfolios for the show provided by Moore & Giles (www.MooreandGiles.com) and feature an exclusive collaboration between the brand and illustrator Richard Haines (www.RichardHaines.com). 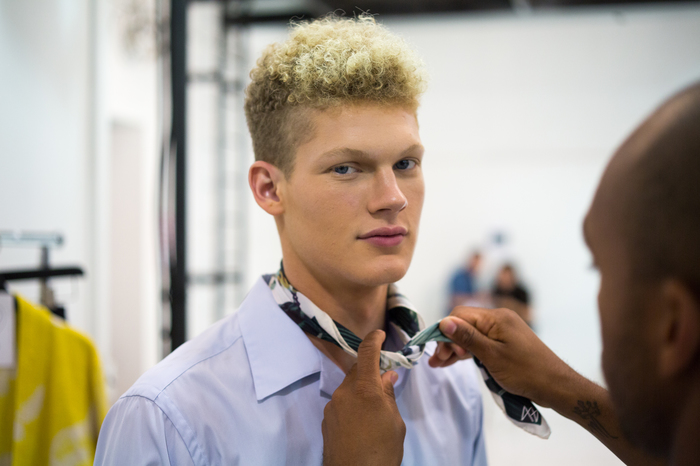 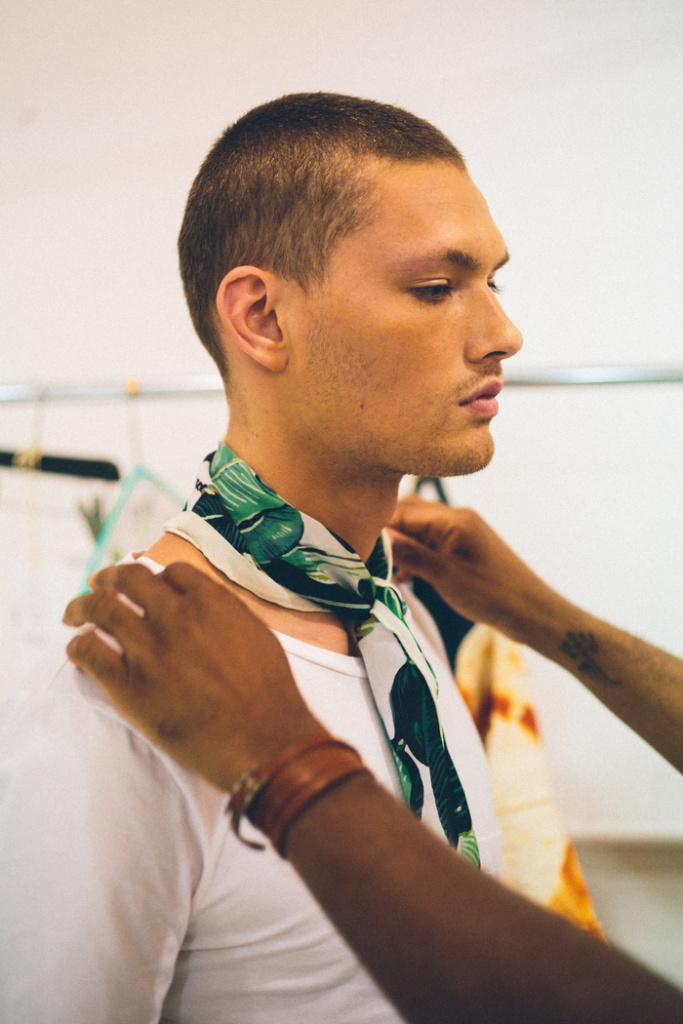 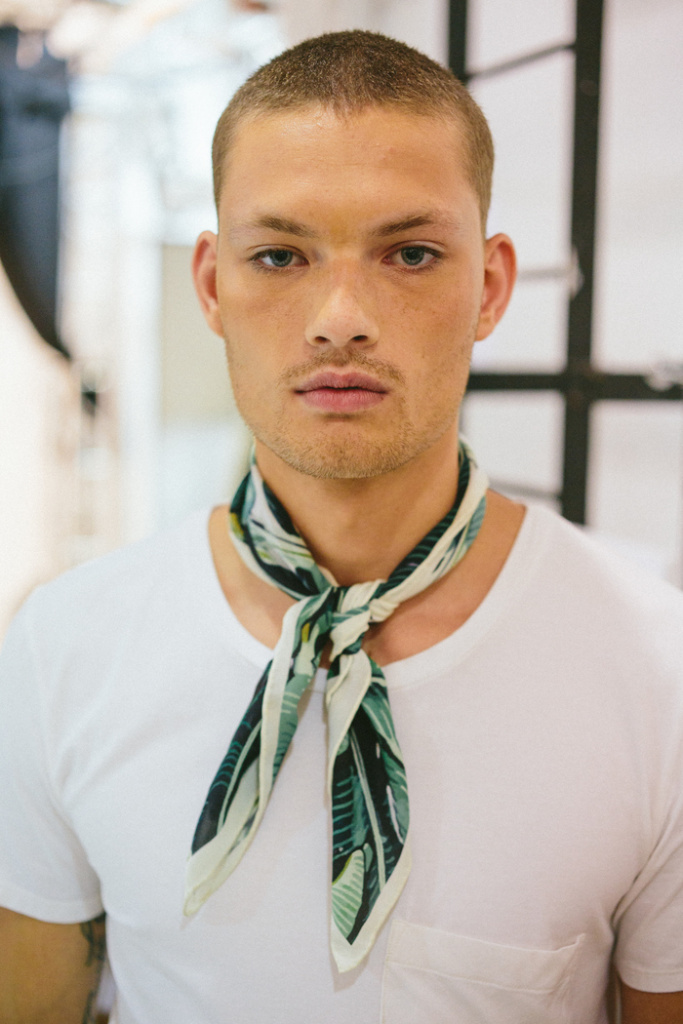 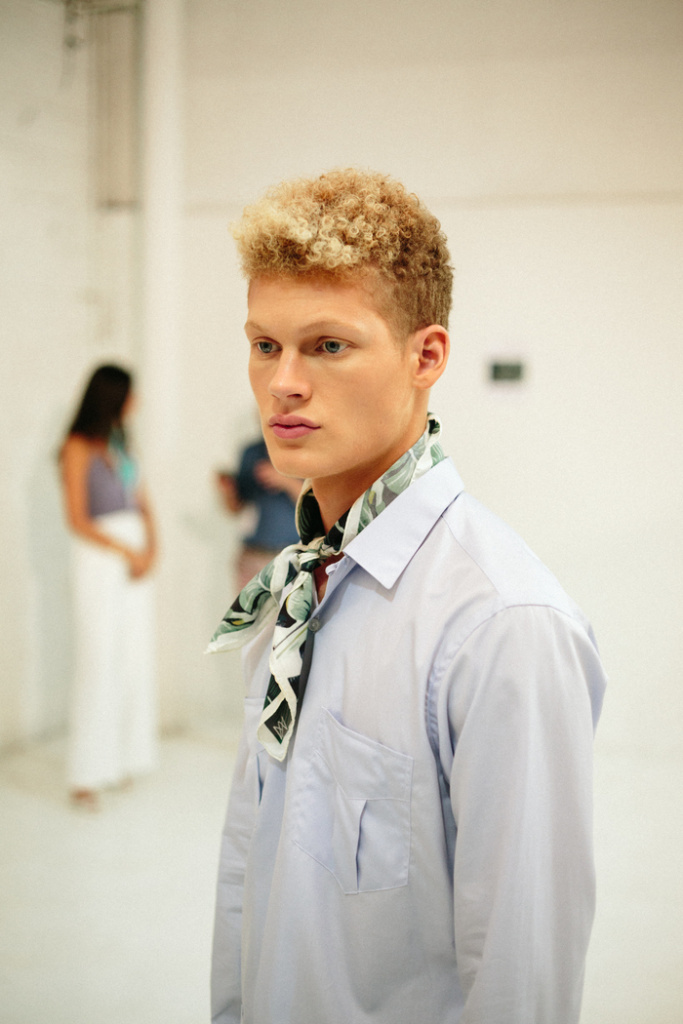 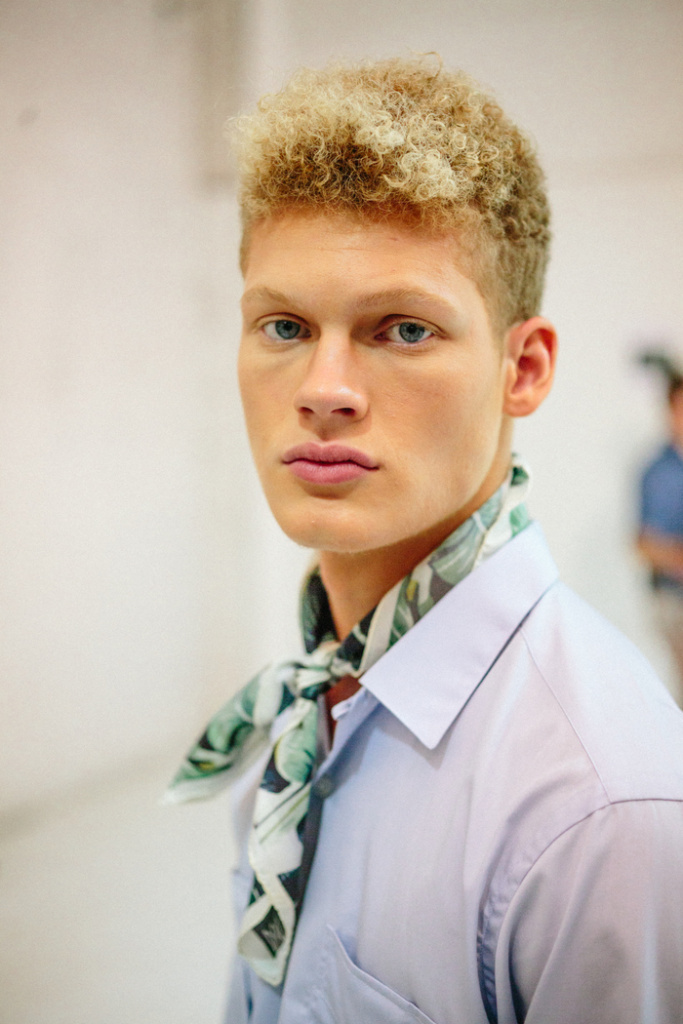 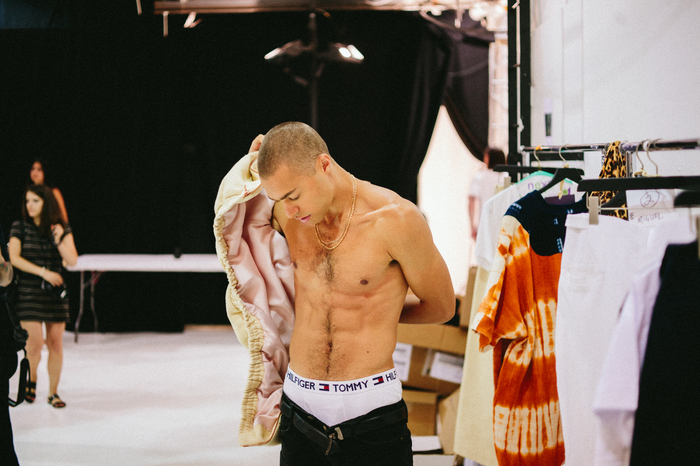 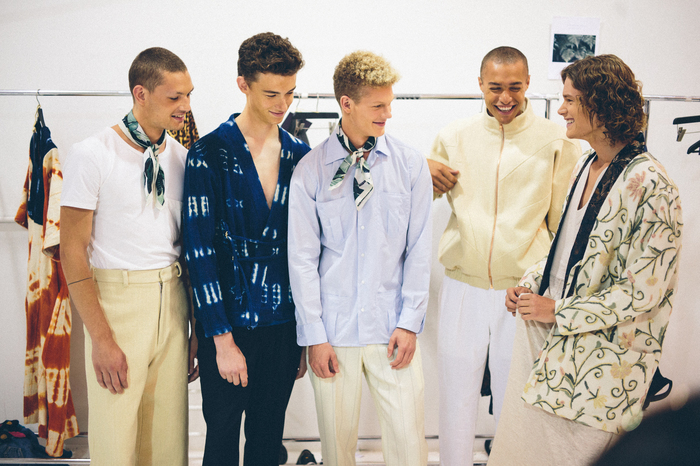 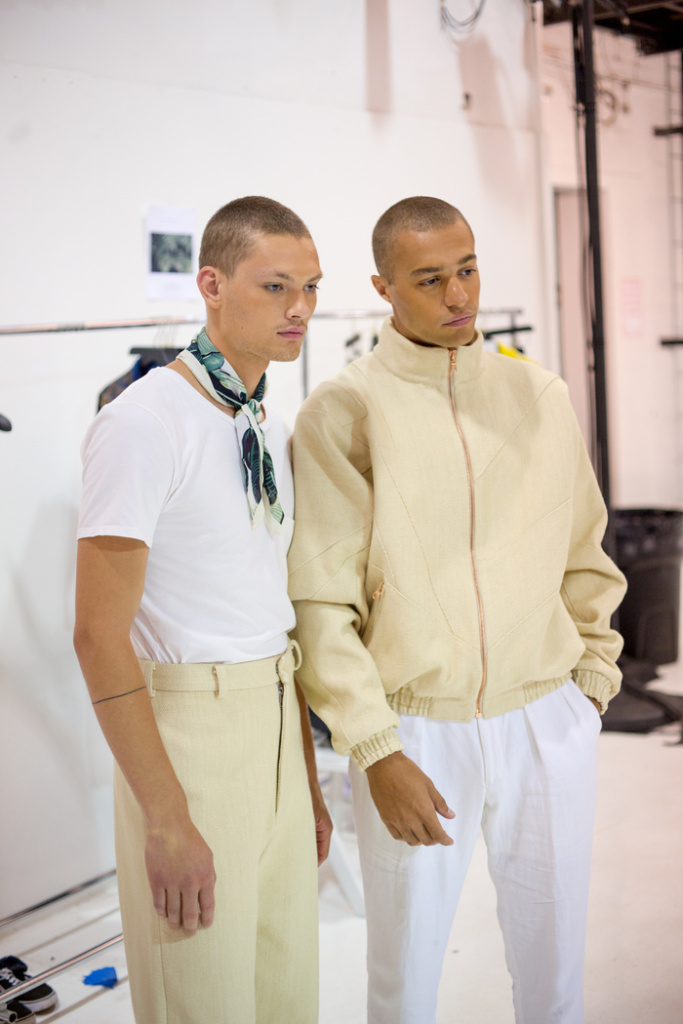 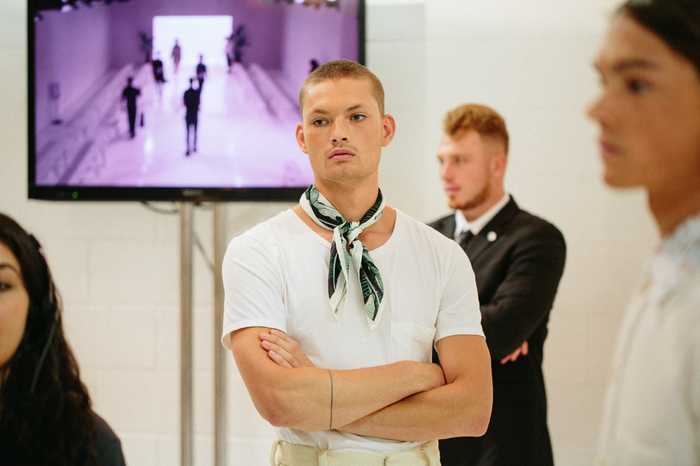 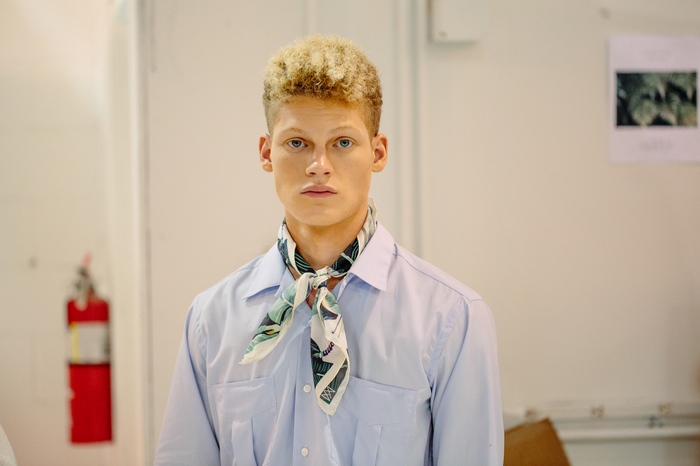 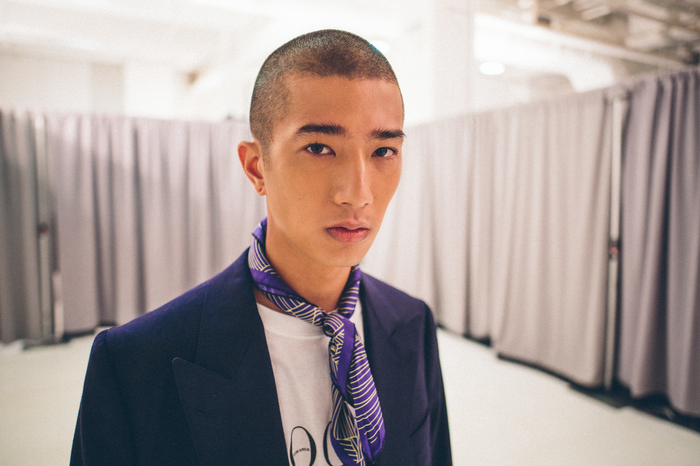 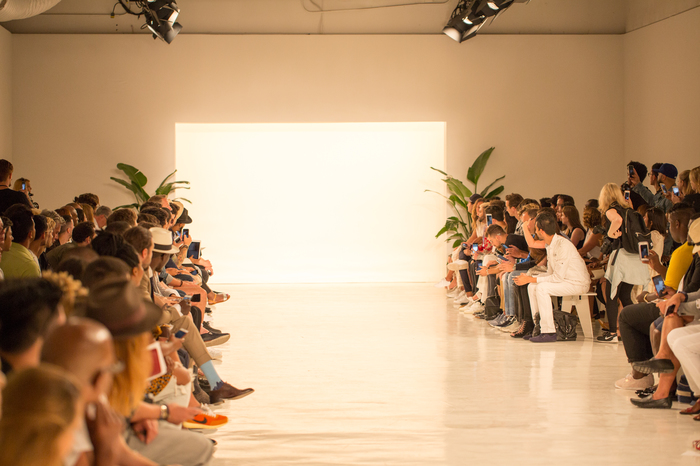 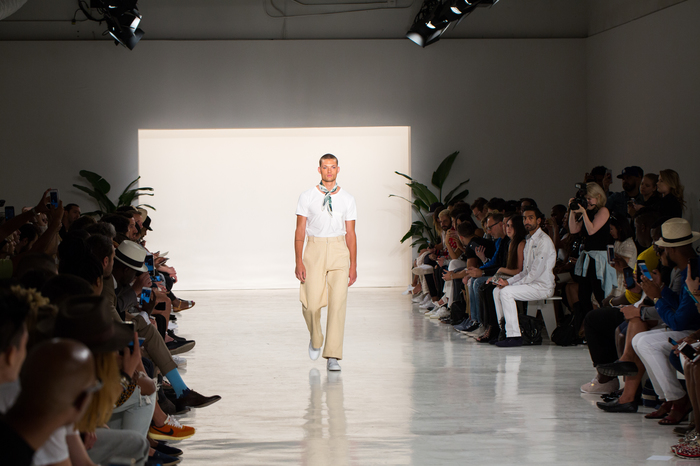 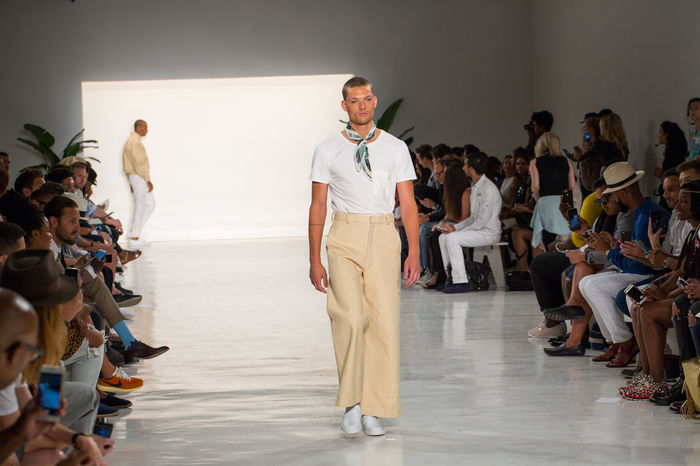 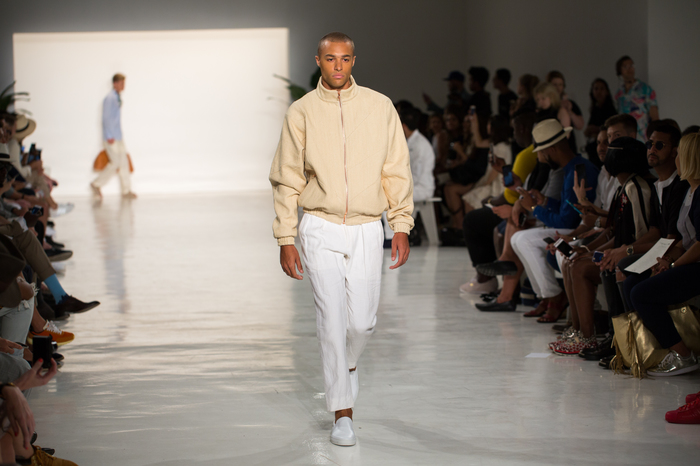 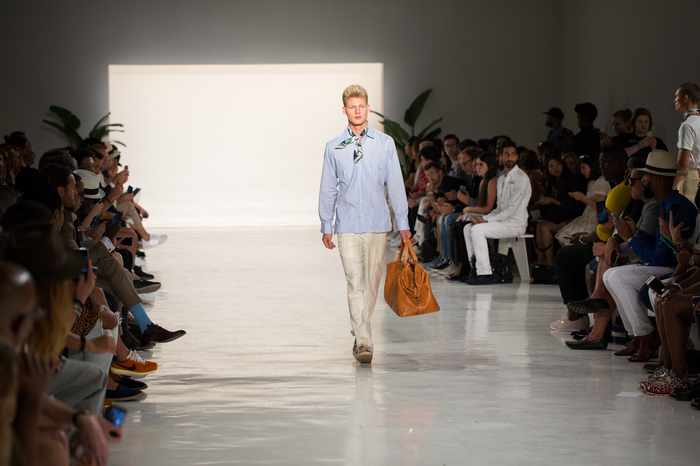 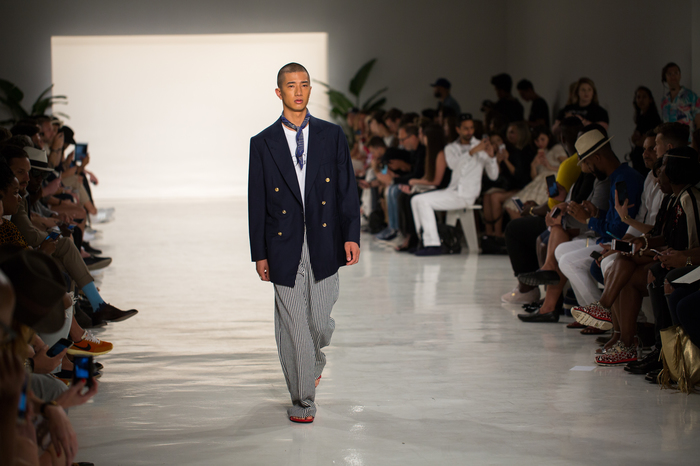 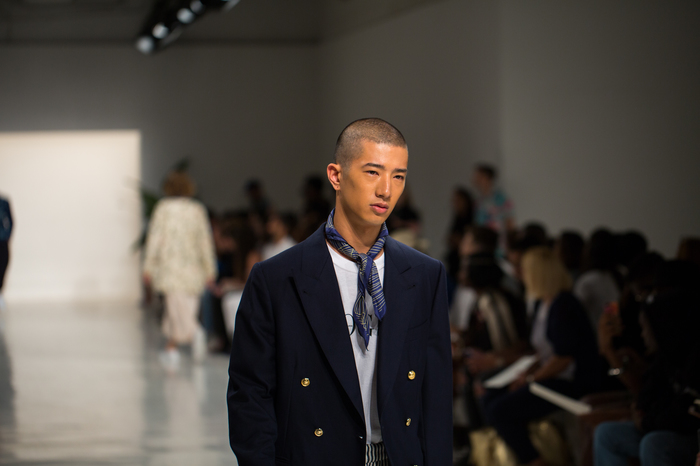 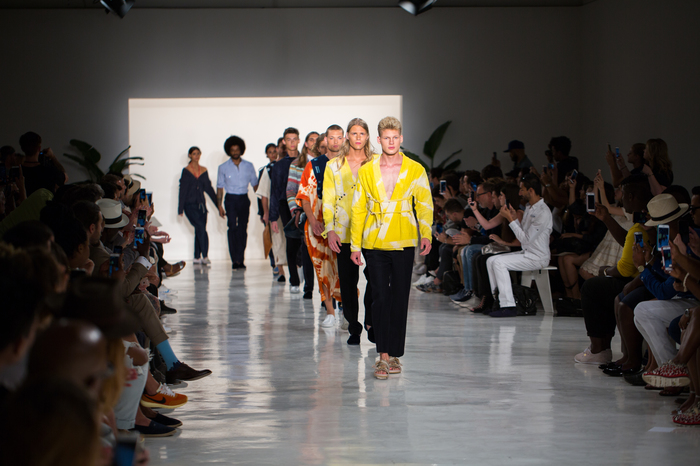 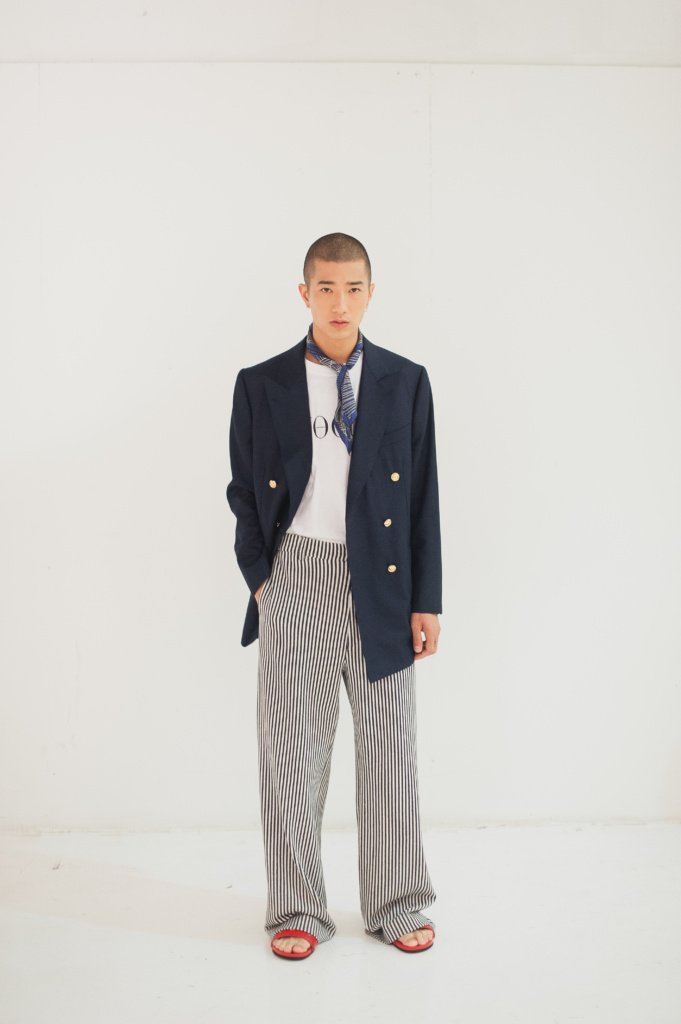 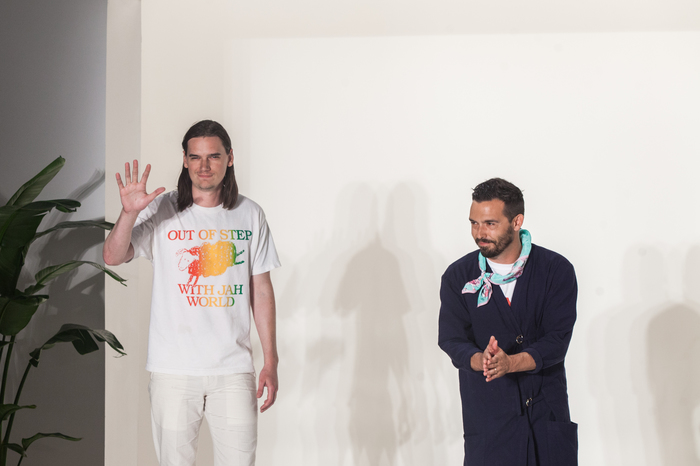 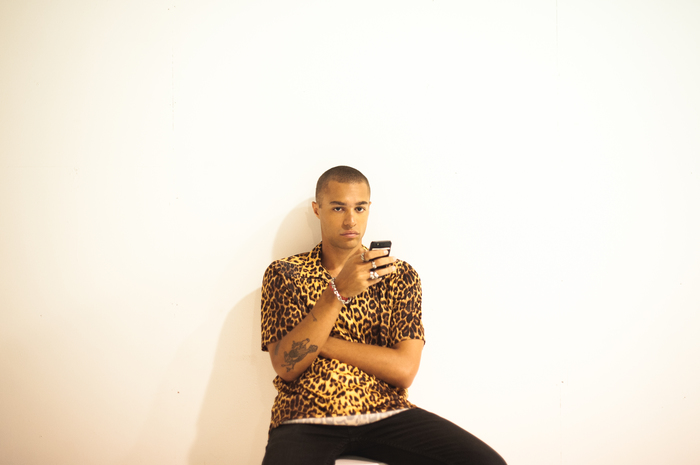 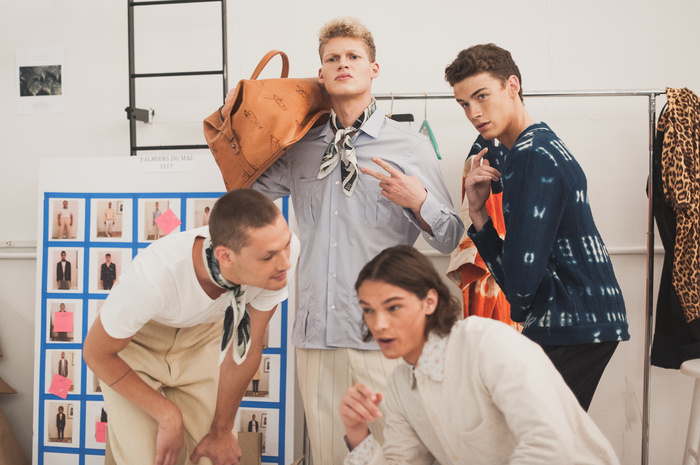 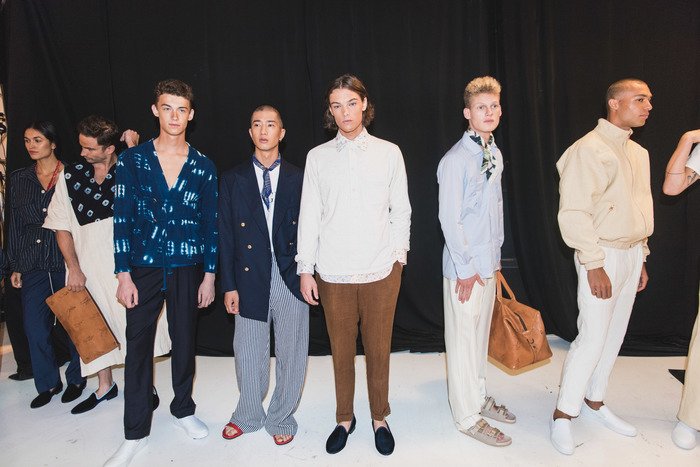 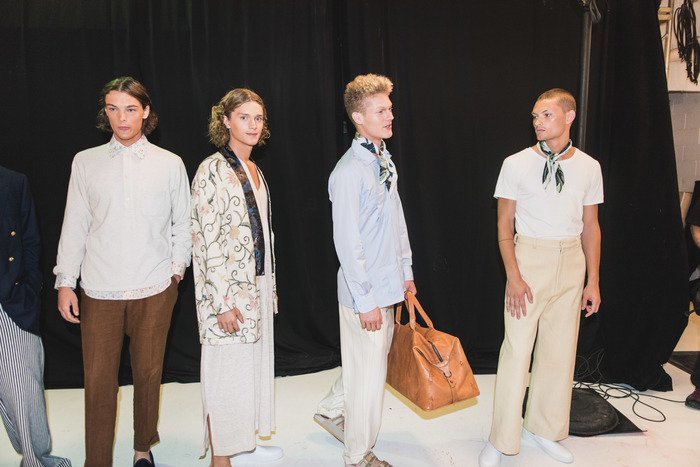 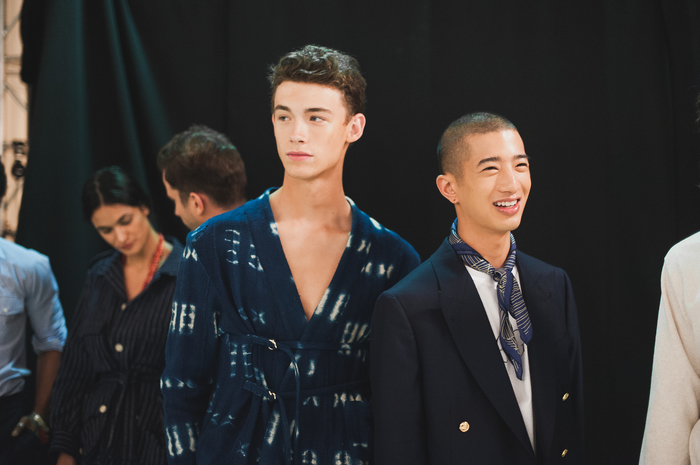 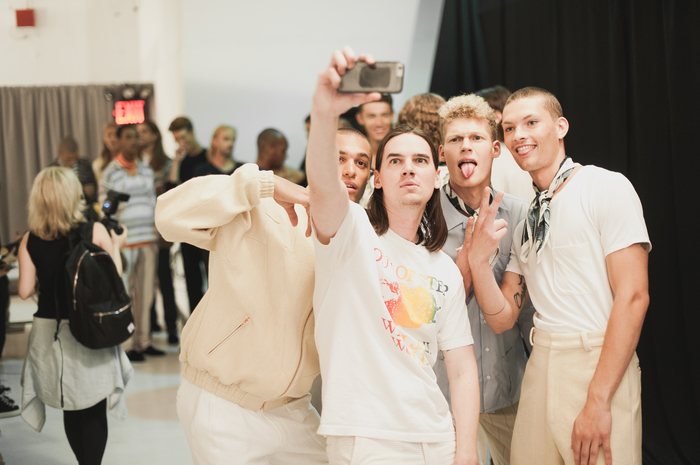